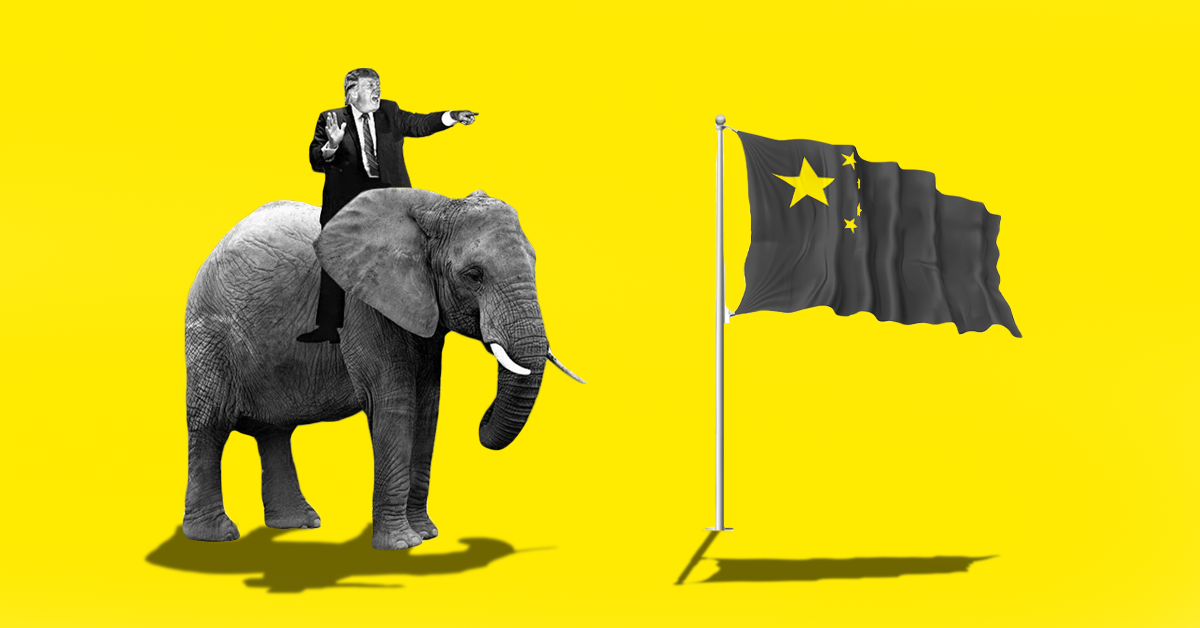 It’s been almost three months since the coronavirus pandemic completely changed the lives of Americans and brought the country to a standstill. While Americans continue to get sick and millions have filed for unemployment, the President, Republicans in Congress, and conservative outside groups have started the early stages of pivoting their political messaging to China.

From March 1 – May 15, the Trump campaign, Republican Senators, and several conservative outside groups have started to put money behind that pivot, collectively spending nearly $1 million on an estimated 6,000 Facebook ads mentioning ‘China’ or ‘Chinese’. The bulk of that spending has taken place in the first two weeks of May, and does not include the millions spent on TV and other platforms. Using Facebook’s political ad library, we took a deep dive into these ads, and they show clear strategic patterns in spending, messaging, and creative.

Spending hundreds-of-thousands-of-dollars on online advertising to take the blame off of the Trump administration’s early inaction on the coronavirus, conservatives are betting that voters will be easily distractible online. But, until late March 2020, President Trump was still tweeting compliments about the Chinese government. In fact, while Trump was tweeting out his respect for President Xi on March 27th, over 100,000 cases were in the U.S., with 1,581 Americans dying from the virus.

On April 16th, the Trump campaign started running its first ads on the platform attacking China for the coronavirus. Of course, this wasn’t the first time Trump has attacked the Chinese government on Facebook; he did so multiple times throughout 2019. 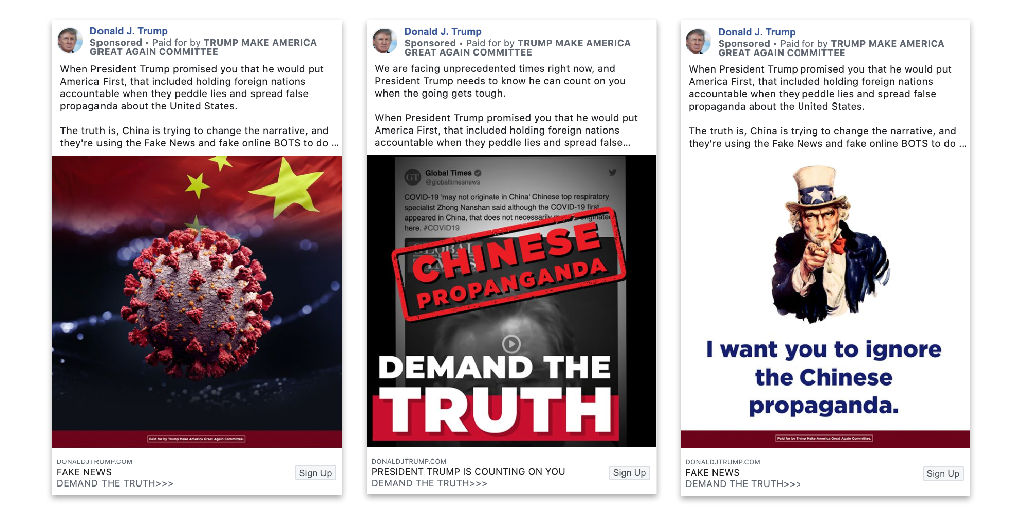 However, these new ads accused the Chinese government of using “bots” and “fake news”, and painting  “false propaganda” around the coronavirus. How Joe Biden, a private citizen, would be engaged in such complex geopolitics while also running for president is beyond us, but we all know that the Trump campaign isn’t known for its ironclad logic. Between March 1 – May 15, the Trump campaign spent an estimated $616,535 on 4,830 China-related Facebook ads, the majority of which was spent in the first two weeks of May.

Rather than acknowledging his own administration’s failure to contain the pandemic by helping governors and hard-hit cities, President Trump has returned to his safety-blanket strategy of far-right, red-meat rhetoric to distract from the actual problem.

The Biden campaign has refuted these claims – recognizing the potential for conservative misinformation to spread like wildfire, his campaign almost immediately began a counteroffensive setting the record straight: 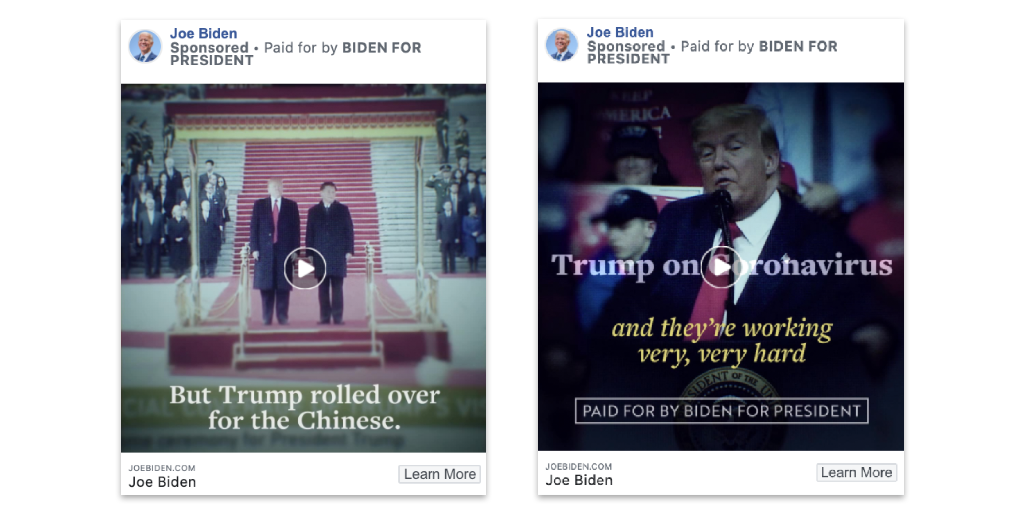 On April 20th, their campaign ran Facebook ads highlighting how Trump’s attacks are a distraction from his administration’s own failures to deal with the Chinese government.

Then, on May 12th, the Trump campaign began an onslaught of new attack ads, tweets, and posts on Facebook and elsewhere slamming Joe Biden on multiple fronts, including on China. 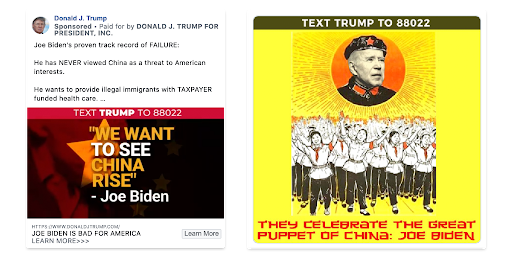 This wave of ads came after Trump campaign manager warned on May 7th that their campaign would soon begin firing “on all cylinders.”

Yet, it’s not just Trump who is running an anti-China campaign to redirect public attention. Conservative outside groups have also spent significantly on anti-China Facebook ads since the pandemic arrived in the U.S. 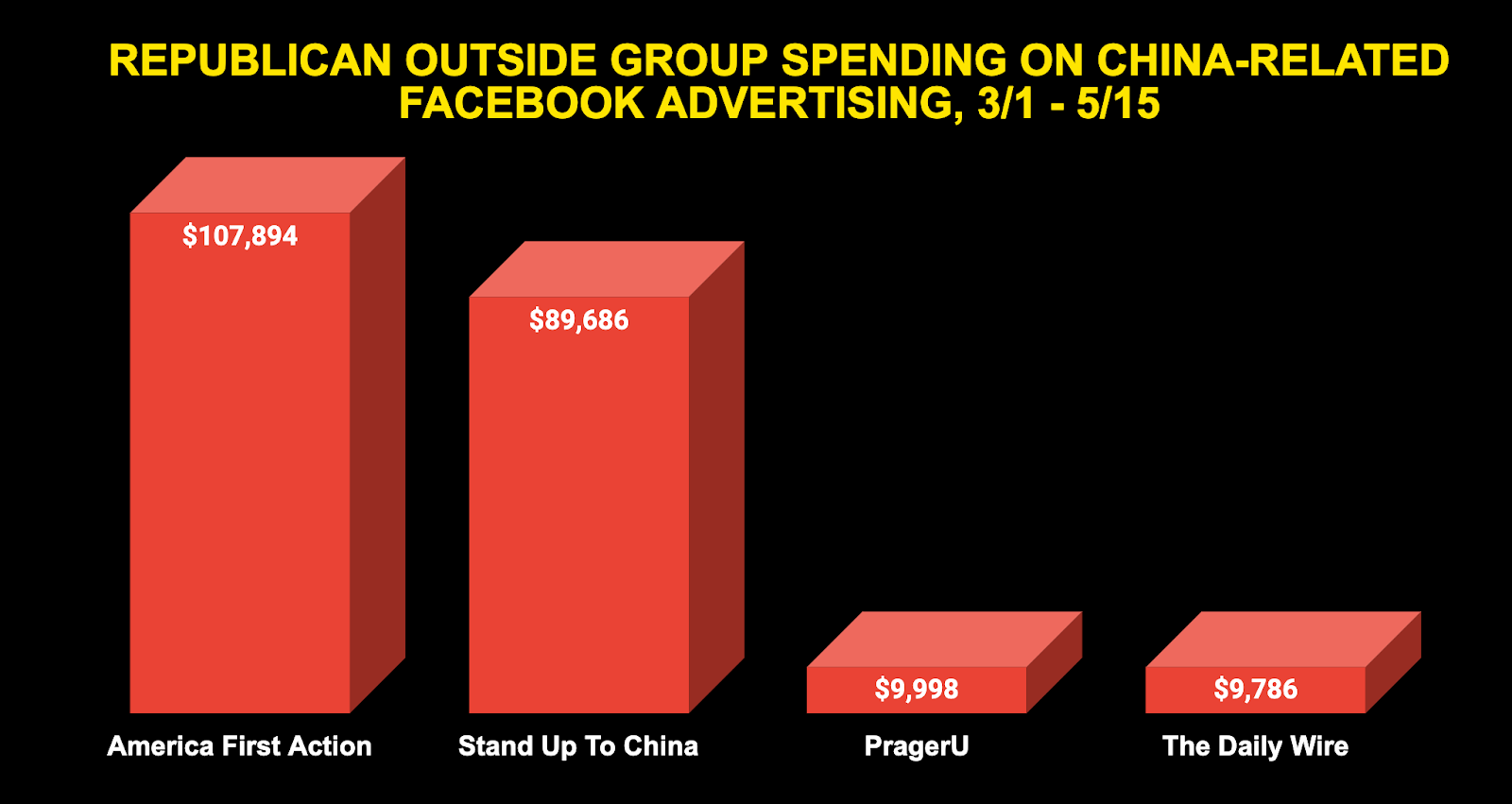 The day after the Trump campaign began running their first wave of anti-China coronavirus ads, their largest outside supporting entity, a super PAC called America First Action, went up with a similar campaign on Facebook. These attack ads refer to the Democratic nominee as “Beijing Biden”, and feature multiple videos of Joe Biden with members of the Chinese government, pulling many of his past quotes out of context. Now, just a little over two months since America First Action started their Bejing Biden campaign, the group has spent $107,894 on 212 anti-China attack ads. 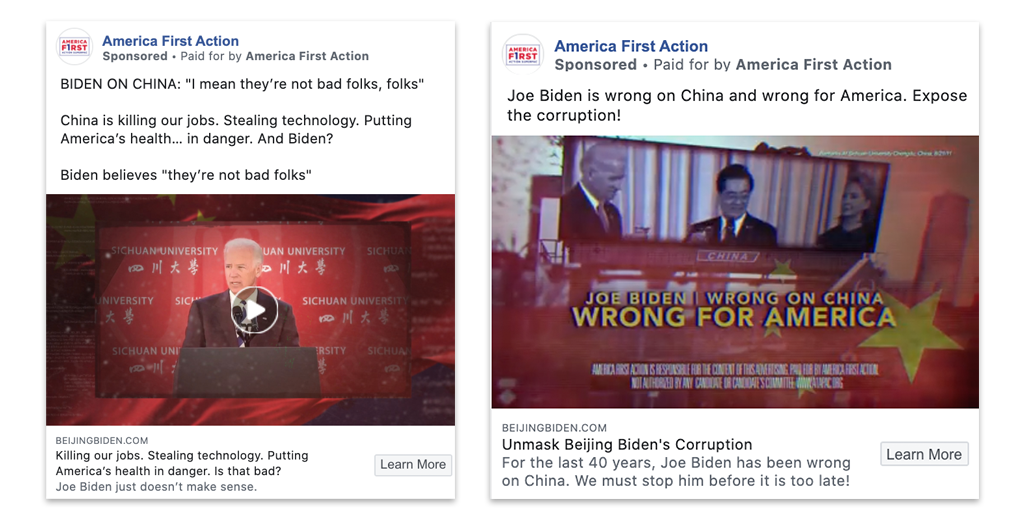 Another group, “Stand Up to China,” has been one of the largest anti-China advertisers on Facebook, spending $89,686 on 129 Facebook ads. While the group has run multiple ads attacking China on issues that do not concern the coronavirus pandemic, the group has reinforced the President’s narrative by attacking China and accusing the World Health Organization of helping China “lie.” 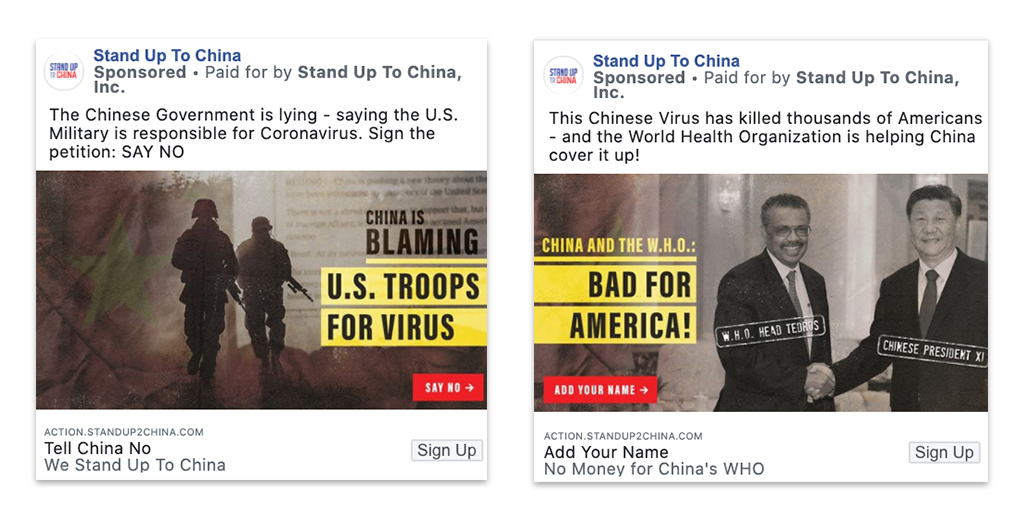 Conservative digital media sites like The Daily Wire and PragerU, have also begun spinning narratives to reinforce the President’s and Republicans’ rhetoric. Both sites spent nearly $10,000 on Facebook ads that mention China. The Daily Wire used their Facebook ads to link to an article where Shapiro argues that the “Chinese government is chiefly responsible for the explosion of this pandemic.” Meanwhile, PragerU used its Facebook ads to boost video content attacking the mainstream media and polls on China. 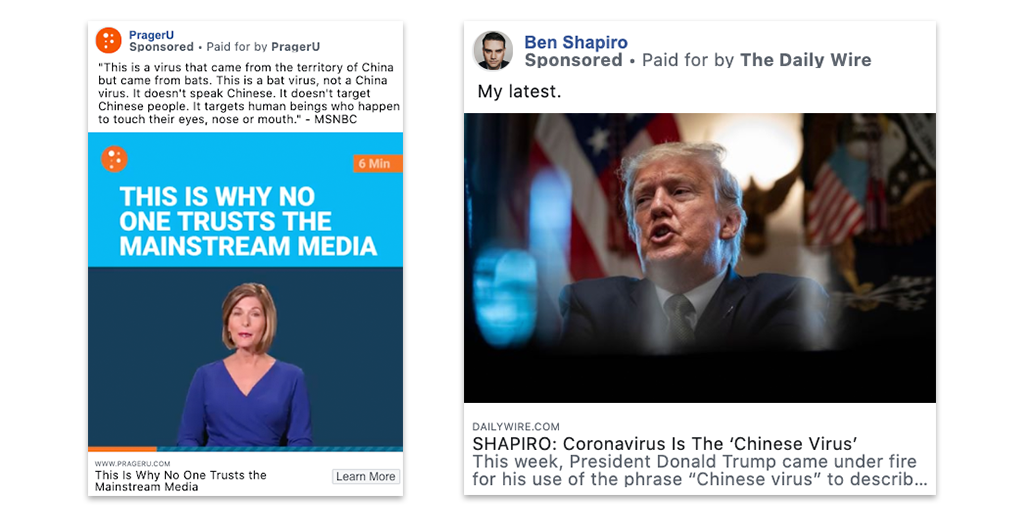 The NRSC memo & evidence of coordination

These narrative patterns haven’t just emerged organically, and there’s evidence that this anti-China pivot is being coordinated to help Republican candidates down-ballot. On April 24th, Politico reported that the National Republican Senatorial Committee shared a 57-page memo with Republican U.S. candidates to not “‘defend Trump, other than the China Travel Ban – attack China.”

That’s precisely what Republicans have begun doing. In fact, between March 1st and May 15th, 17 Republican senators spent a combined $89,636 on Facebook ads mentioning China, which is small but notable due to the little amount of money most of them have invested in total on Facebook all year. Here is a breakdown of China-related Facebook spending by Republican U.S. Senators or Senate candidates: 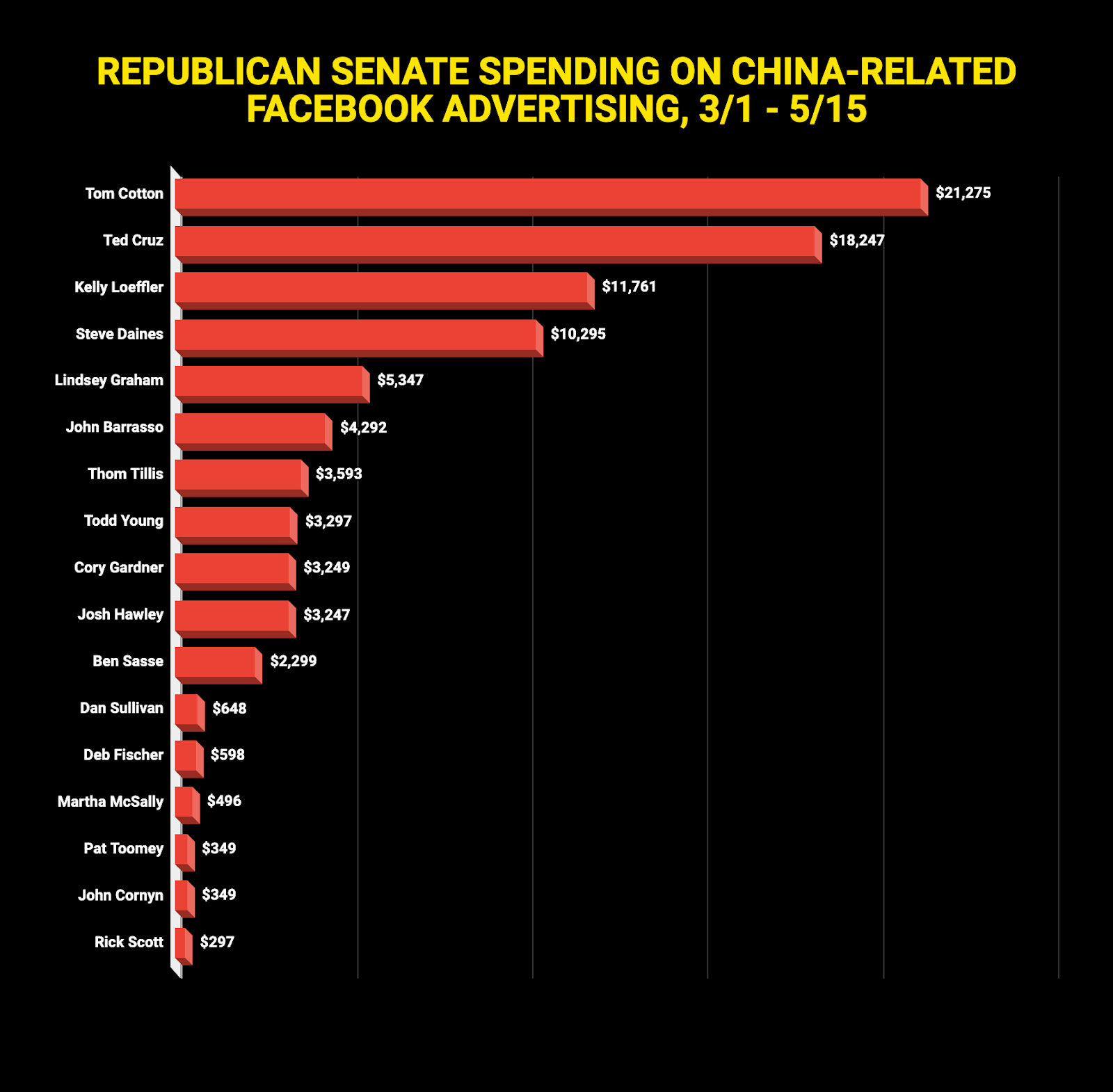 Sen. Tom Cotton topped the list, spending $21,275 on 151 ads during that time period. While his ads attack the Chinese government, they also criticize Biden for being “weak on China.” Cotton has accused China of disguising the severity of Coronavirus since January and reportedly believes that the virus came from a lab in China. 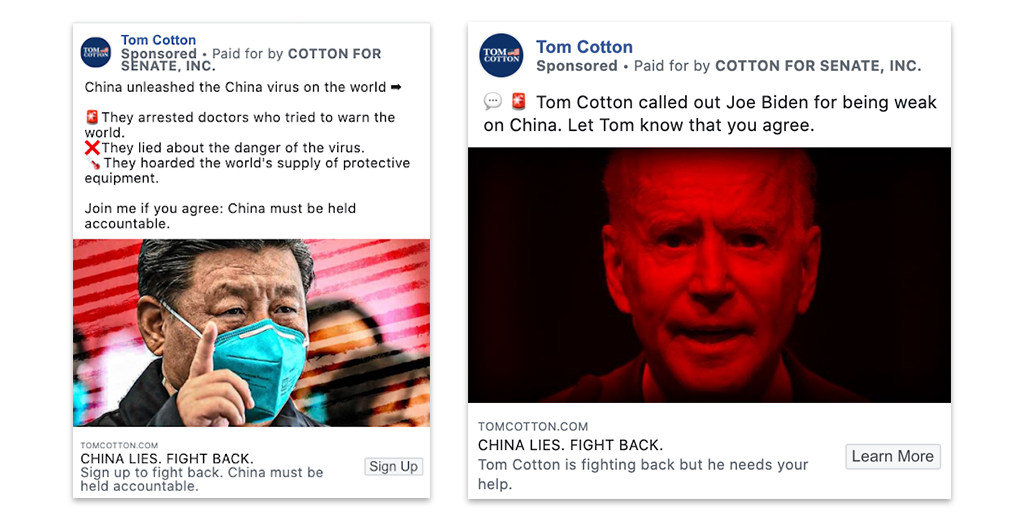 Another top-spender on China-related Facebook ads has been Sen. Ted Cruz, spending $18,247 on the subject, which is no surprise given how outspoken the Texas Senator has been in the past. He’s led the charge in crafting political legislation against China, and there have been 62 China-related bills introduced by Republicans between February and April. 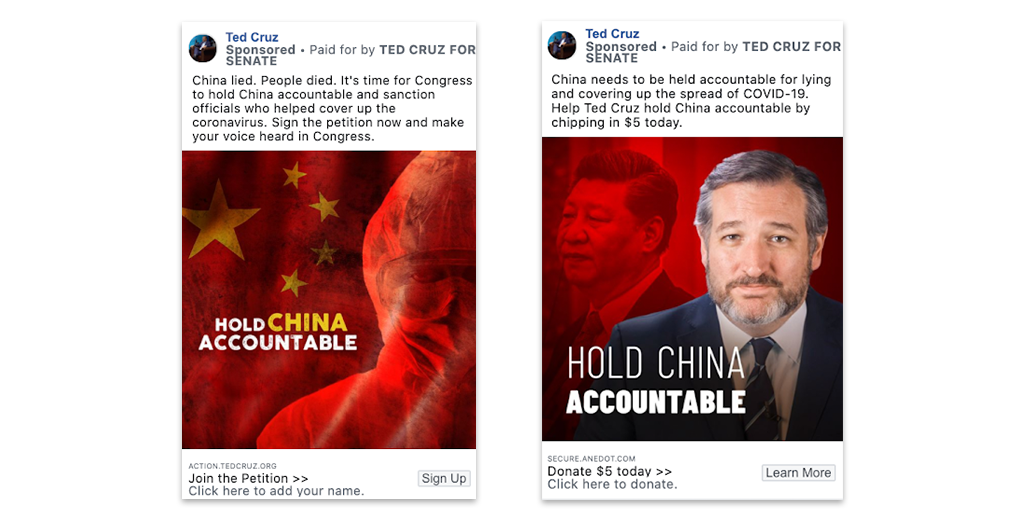 Five senators that are facing uphill re-election battles, Daines, McSally, Gardner, Tillis, and Loeffler, have also taken the NRSC’s guidance. The commonality between their ads is that they tend to mention holding China accountable or urge to bring manufacturing back to the U.S. 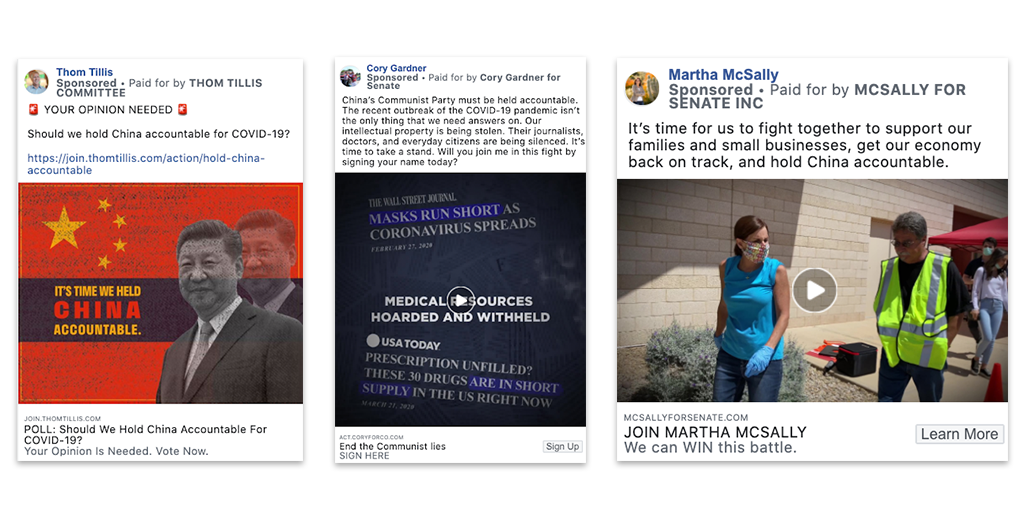 Georgia Sen. Kelly Loeffler spent the most out of those five Senators, spending a total of $11,761 on 78 anti-China Facebook ads to appeal to voters. Some of the ads highlight bringing back the “supply chain” to the U.S., while others discuss how the Chinese government can’t be trusted. Sen. Daines uses his Facebook ads to accuse China of putting the lives of Montanans at risk, and how Sen. Daines has apparently fought to bring drug manufacturing back to the U.S. rather than China. 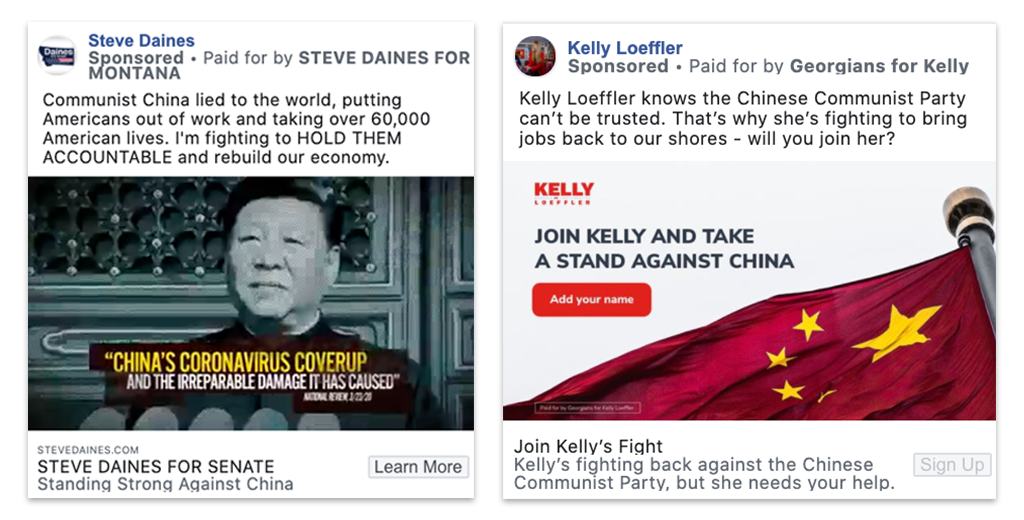 Our analysis of Facebook advertising shines a light on the President and his allies’ political solution to the coronavirus pandemic: deny, distract, and pivot to China. Efforts to blame China have been clearly signaled by the President and later coordinated by Republican party committees and outside groups. The memo given by the NRSC to its candidates implies that they recognize Trump acted far too slow on the pandemic, and Republicans should focus their messaging elsewhere.

For progressives, it’s absolutely critical to stay focused on the President’s failures and to not be baited into playing defense on this issue. One could assume that the intent behind conservative pivot to China is to force Democrats and progressive groups into a broad debate over xenophobia and U.S. China relations, instead of focusing on the administration’s failures to control the pandemic. The Biden campaign’s approach to a counter-offensive against Trump on China is a strong response. At the end of the day, the crisis in which we find ourselves could have been lessened had the Trump administration acted sooner to save lives.

It is highly likely that the issue of China is going to be front-and-center this election season, and we will continue to monitor the anti-Chinese rhetoric, from tweets to digital advertisements to track how the issue plays out. For weekly updates on the digital race for the White House, including specific spending numbers and details, sign up for ACRONYM’s FWIW newsletter. 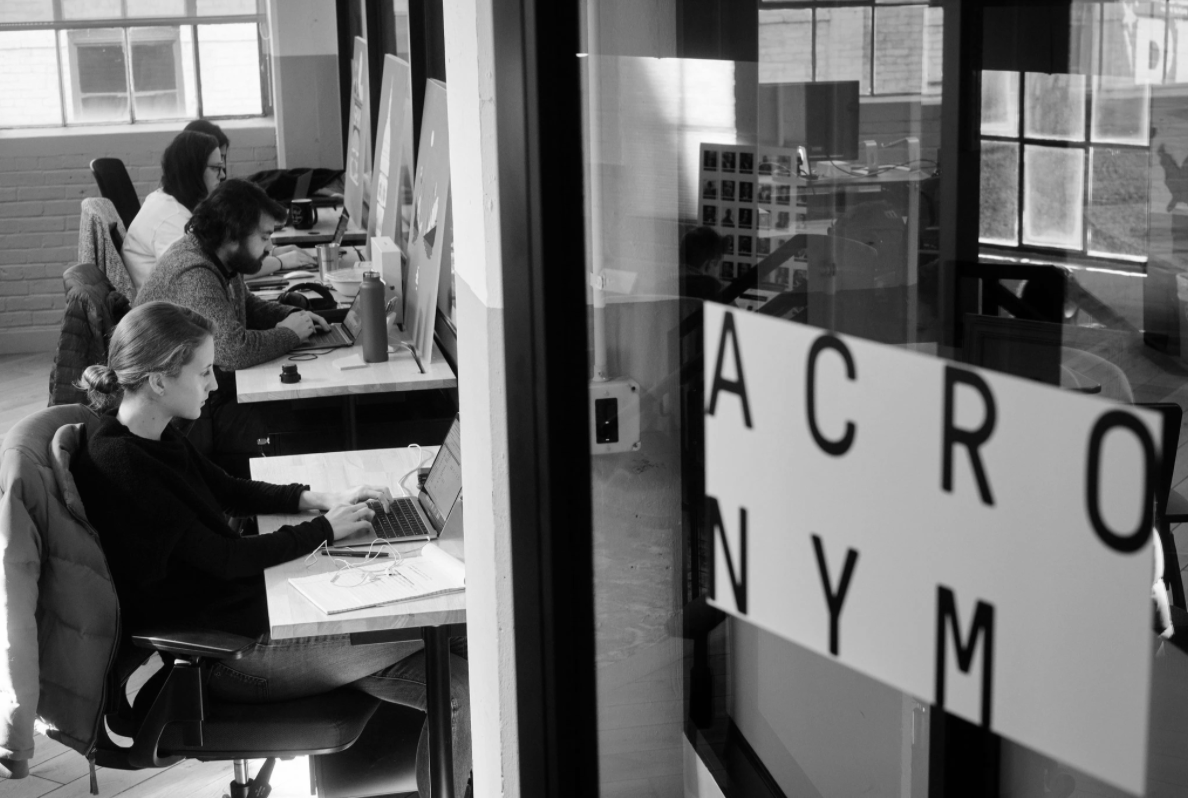 New York Times: How a Digital Ad Strategy That Helped Trump is Being Used Against Him

New York Times: How a Digital Ad Strategy That Helped Trump is Being Used Against Him