Here we go – one week from today, polls will close, and soon after (we hope), the 2020 presidential election will finally come to a much-awaited end. And though polls still look rosy for Joe Biden and at times catastrophic for Trump and the GOP, we’re keeping our foot on the gas until every vote is counted – and leaving nothing to chance.

As many as 1,000 Americans are dying of COVID-19 still every day; millions are falling deeper into punishing poverty while the White House fails to act for them; our world continues to burn; and Trump’s and the GOP’s assault on our democratic institutions is now more entrenched in our courts than it has ever been. The news is bad – really bad – and that’s why we are keeping the most effective headlines in the news feeds of the most critical voters who still need to cast their ballots for Biden.

For the final Weekly Forecast before the election, we’ll be sharing with you 10 ads – seven that drew opinion away from the president and three that didn’t – that address some of the most pressing issues of the election.

Here are 7 ads that work… 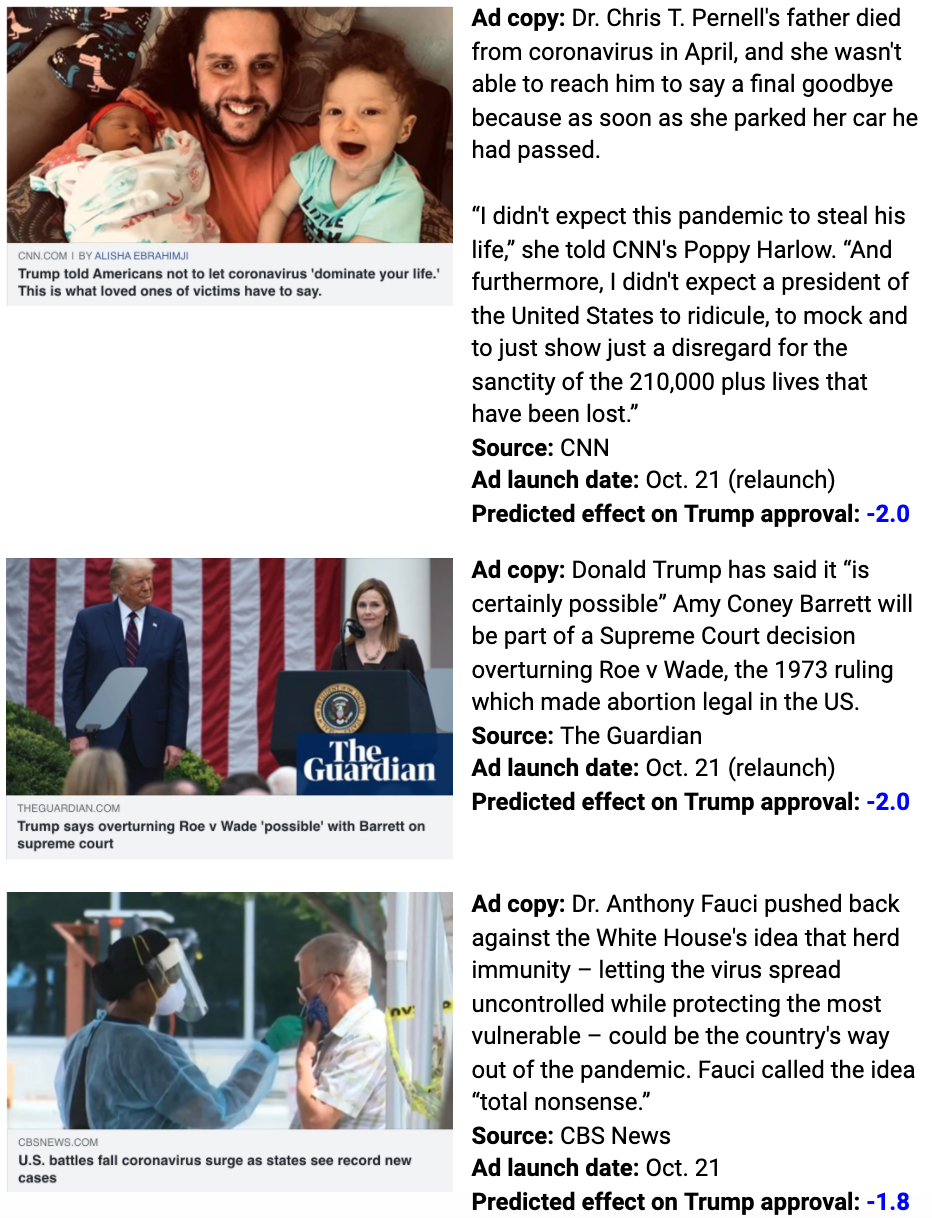 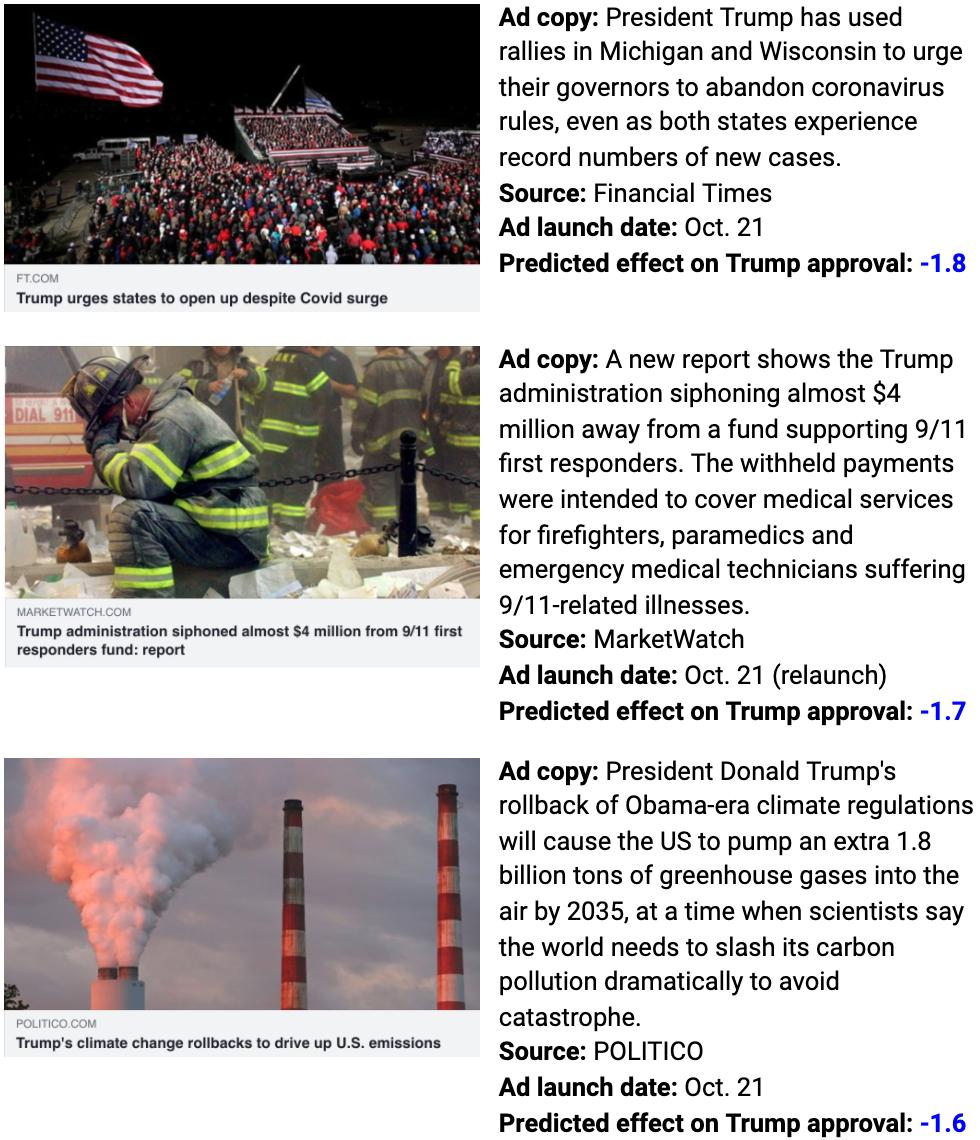 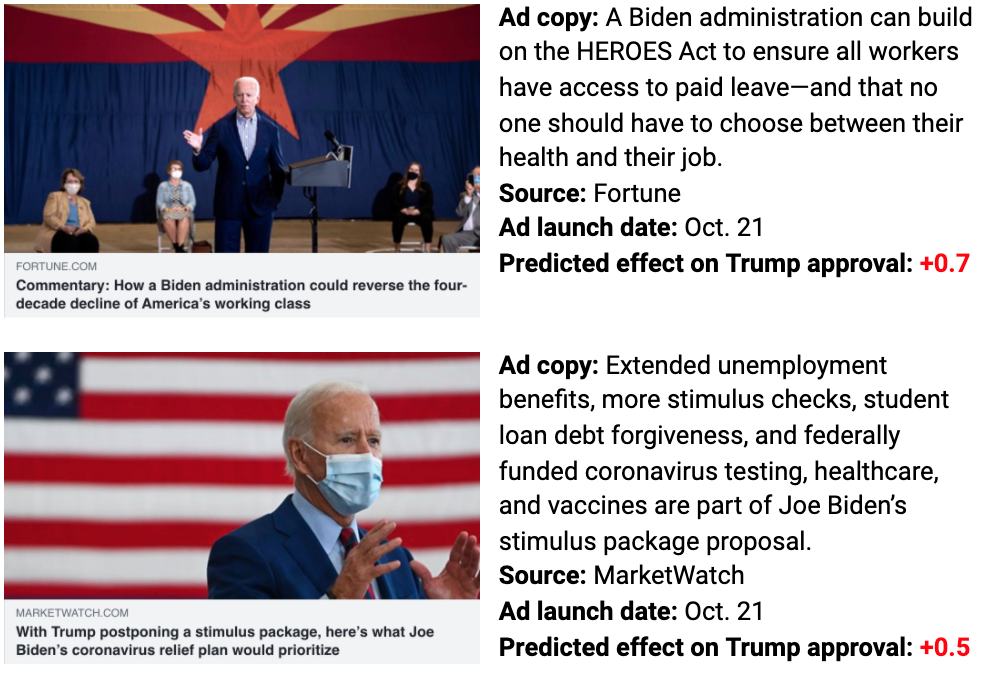 To quote the president from one of his rallies this week: “COVID, COVID, COVID, COVID. ‘Today let’s talk about COVID!’” Well, let’s talk about COVID – and how we can still effectively message against him using the suffering he’s caused during the pandemic. With one week until the election, we’re deploying our top performing messages to our audience of low-knowledge voters in five swing states, and are relieved to see they continue to be effective.

You might recognize our top ad this week, as it was also one of our effective ads from earlier this month. It seems to us that putting a human face to Trump’s failures, especially with something as abstract as a pandemic, is still extremely effective against him. Also in the mix of COVID-related ads this week are two more headlines that frankly compare the Trump administration’s and campaign’s actions on the pandemic to the reality of the situation, and both tests of both ads confirmed to us that making that comparison is also still effective against the president.

We did find one angle with regard to the pandemic that was less successful. We tried to use Bob Woodward’s findings that Trump knowingly downplayed the virus against the president, and we found that, at least in this scenario, it created backlash. It’s possible that we’re once again seeing an effect from folks just not believing the ad or Woodward’s credibility as a source, but we should also consider that Trump’s argument – that he did it to prevent us from panicking – may have actually been effective.

We also ran an ad addressing Amy Coney Barrett’s ascension to the Supreme Court that specifically cites her threat to Roe v. Wade. Unsurprisingly, this angle was quite effective against Trump, especially considering how popular legal abortion actually is in the United States. According to the Pew Research Center in 2019, 61 percent of Americans think abortion should be legal in all or most cases.

Following the final presidential debate, Trump and some journalists were quick to assert that Biden’s commitment to transition away from fossil fuels was a dangerous position. We want to be crystal clear here: that conventional wisdom is wrong and has been for years:

According to a June 2020 poll by Data for Progress, 58 percent of Americans believe that spending $5 trillion to transition away from fossil fuels by 2040 is worth the cost. So, we were not surprised to find, once again, that one of our most effective ads this week was one that pointed out how much planetary damage Trump would cause in a second term.

Finally, we encountered some disconcerting signals regarding pro-Biden messaging on the economy. In the past, we have found some success in talking about Biden’s “Build Back Better” economic agenda, but in that case ads we tested referred directly to Biden’s plan to tax the wealthy. With the new ads we tested here, we may be seeing backlash for two reasons.

The first could be that we’re still just seeing a disbelief effect like we’ve described previously. The second may be that some voters are seeing these specific economic benefits from Biden’s plan and instead of coming away with, “that will be good for me,” they may be thinking, “that will mean more taxes for me,” especially in light of the onslaught of television ads from the Trump campaign making this very argument that we have seen to test effective. Considering these possibilities, we should also keep in mind in this final week that Trump’s opinion advantage on the economy is still solid, and that plenty of voters can be wary of a bold progressive economic agenda.