In the years since the 2016 election, more political strategists have begun to understand the necessity of courting influencers and online creators. They have an authenticity that candidates dream about having, they convert sales, and they have young audiences willing to take advice from them.

These influencers are different from your Hollywood TV and film stars, which campaigns have had inroads into for decades via support from major talent agencies. Progressives need to expand their influencer pool to content creators whose businesses are mainly, if not wholly, sustained on platforms such as Twitter, Instagram, YouTube, and Facebook. 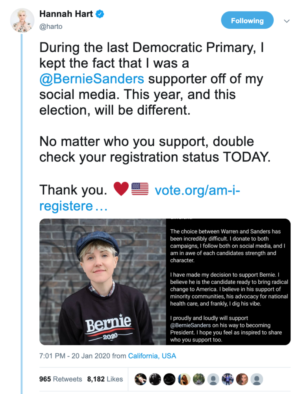 Campaigns and progressive organizations have yet to *really* tap into these types of partnerships since 2016, but probably not for lack of trying. I’d bet you $1,000,000 (that I don’t have, sorry) that digital staff across the country have been sending DM’s and emails and calling agents and managers trying to court the support of influencers and Creators.

I know because that was me four years ago, when I was working for Hillary for America. Based on the lack of content with influencers and creators I’ve seen online, I can only assume digital staff working on campaigns now are getting the same responses I did in 2016.

For influencers and creators, the audience is king. Without an audience, they have no support system, no brand deals, no sponsorships, and no relevance. In 2015, during the Democratic primary, the statement I heard over and over again was “I don’t want to alienate my audience,” and “I can’t risk losing my audience” — but 2015 was also different.

In 2015, the Democratic primary was a two-person race (sorry Martin O’Malley), and for young people who make up the majority of influencer and creator audiences, it put a highly respected but flawed boomer against a firebrand “newcomer.” The Mortal Kombat-style fight between the two candidates’ supporters became more vicious as it became clearer that Hillary Clinton would eventually win the nomination. What influencer in their right mind would want to jump into that fight? 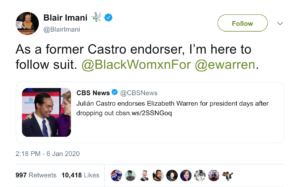 Activist and social media influencer Blair Imani was a public Julian Castro supporter who moved to Team Warren after his withdrawal.

At this point, the 2020 cycle is the farthest thing from 2016’s protracted one-on-one primary — there are candidates jumping in and out less than two weeks from the first contests and the field stands at 12 as of this writing.

The candidates themselves, for their part, have led by example and made a point, both in person and online, to portray a sense of camaraderie among themselves. By our observation, supporters have let their candidates set the tone, and for the most part have adhered to this friendly culture. If there was ever a time for influencers and creators to jump into friendly primary politics, it’s now.

Young people are some of the most disengaged voters in elections, and the idea of someone they look up to getting involved in their civic duty in a civil manner could encourage young audiences to also become engaged in the process. The implications of even just a few influencers and creators making this decision could have a huge impact on the lives of everyday Americans.

Research has indicated that teens look up to and want to be like the influencers they follow, and influencers have an opportunity at this critical moment in history to lead by example. 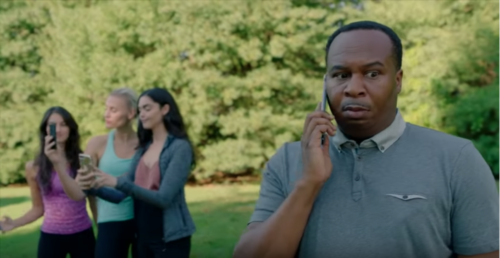 They can support a candidate, explain to their audiences why they chose that candidate, encourage their audience to look into a candidate who aligns with their values, and graciously accept the outcome if their candidate is unsuccessful. And then, once a nominee emerges, the audience of an engaged influencer will be more receptive to content focused on beating Donald Trump.

That brings us to the second thing that makes getting involved now so important: Donald Trump is the President of the United States. We’ve already seen three years of devastating policies roll out, often in quick, disorienting succession — the Muslim ban, children in cages at the border, and the withdrawal of the US from the Paris Climate Accord, just to name the first three that come to mind. 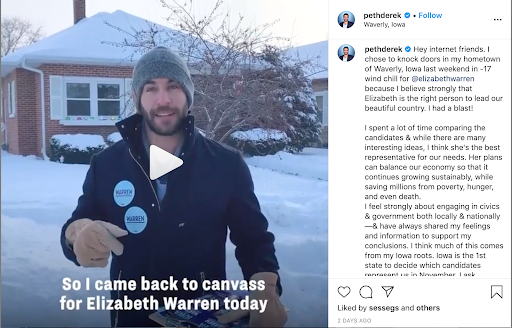 Influencers and creators have the ability to directly impact elections by mobilizing their audiences to get involved in the process (especially if it affects them personally), and in turn guarantee the removal of one of the most embarrassing and detrimental public figures to ever have control of the executive branch.

With all that said, digital staffers are still eagerly awaiting influencers and creators to feel safe enough to jump in, and hopefully the phones will start ringing soon. This is not the type of thing that can be done at the last moment and have an impact. The clock is ticking, and the 2020 election is right around the corner.

Sarah Galvez is the Director of Strategic Partnerships at ACRONYM. If you are an influencer that wants to get involved with ACRONYM’s mission to register new voters, get progressives elected up and down the ballot, and ensure Donald Trump is a one term president please reach out to [email protected]